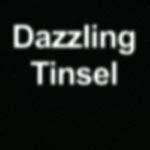 Judith Salmon performs a song of her own composition, Dazzling Tinsel. This film was shot at 9fps. I wanted to see what such a low frame rate would look like and in fact I think it looks rather nice. I wonder what a more dynamic subject would look like?